The Wisconsin Film Festival runs from May 13-20. You can find more information on the Festival here. 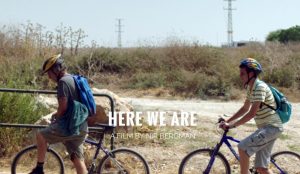 Aharon (Shai Avivi), in his fifties and separated for years from his wife, has given up his career as a graphic designer over the last two decades in order to raise and care for his autistic son, Uri (Noam Imber). When Uri’s mother suggests that it is time for her now young adult son to live in a specialized group home, Aharon is concerned that Uri is not ready for their gentle routine to be disrupted. While on their way to the institution, Aharon decides to run away with his son and, with almost no money in his wallet, the two begin a road trip across Israel. During an odyssey filled with unexpected and revealing encounters, Aharon begins to consider the possibility that perhaps it is, in fact, he that is not ready to be separated from Uri. Along their journey, Uri compulsively views Charlie Chaplin’s first feature The Kid (1921), and while 100 years have passed since the premiere of Chaplin’s comedy milestone, Here We Are shows that there is still power in the simple, universal, and cinematic premise of a parent protecting their child. Though the locales and situation have a decidedly contemporary feel, director Nir Bergman (creator of the television series In Treatment) and screenwriter Dana Idisis take a classical approach to storytelling that nonetheless avoids easy sentimentality and uncomplicated characters. “Handling its themes with sensitivity and respect, the latest film from Nir Bergman is a gratifyingly textured portrait of a loving father son relationship teetering on the brink of suffocating co-dependency” (Wendy Ide, Screen Daily). 2020 Cannes and Toronto Film Festivals. (JH)

Click here to view Here We Are at the Wisconsin Film Festival. 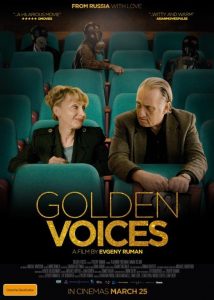 In 1990, Victor and Raya Frankel arrive in Israel along with a mass of other Jewish immigrants from the crumbling Soviet Union. Back in the USSR, the couple were the most in-demand dubbers of international cinema, sometimes providing their voices to dozens of characters in a single movie. Now, the sixty-somethings are struggling to learn Hebrew and having equal difficulty in finding suitable work in their new homeland. While Victor secures them a low-paying gig dubbing bootleg videos for the exploding Russian-speaking immigrant market, Raya gets a more lucrative job using her native tongue as a phone sex worker, a job she keeps secret from her husband to protect their increasingly rocky marriage. Golden Voices is a rare find: a romantic comedy that finds a rich, warm supply of often absurd situational humor in the lives of two film workers who are not superstar performers or directors. Victor and Raya eventually use clout from their association with Federico Fellini to bring the maestro’s little-seen final feature, The Voice of the Moon, to Israeli audiences. The cinephile couple’s success in importing Fellini is shown to be more a personal triumph than a professional or financial one, reminding us that Golden Voices is an affectionate salute to the uplifting power of cinema and the countless number of working-class heroes who make the magic possible. (JH)