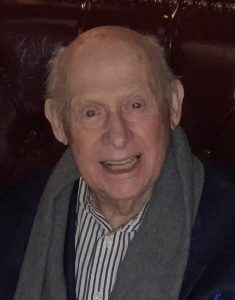 The Mosse/Weinstein Center for Jewish Studies mourns the loss and celebrates the life of Marvin Conney, who passed away on March 25 at the age of 94. Together with his wife Mildred (known fondly as “Babe”), Marv established the Mildred and Marv Conney Fund to support programming about Jews and the arts. Their vision continues today in the Conney Project on Jewish Arts.

Marv and Babe met as students at the UW-Madison, where they both graduated in 1950. Babe stayed, earned a Master’s degree in Mathematics, and then taught Math. After his father passed away at age 59 in 1958, Marv took over the six-year-old family business, an expansion of a family clothing store, first in Ripon, then Fond du Lac, that specialized in protective safety gear for the workplace.  Over the next forty years, Marv — with Babe as his devoted partner and advisor — navigated the business, moved it to Madison in 1964, and grew it into one of the largest privately owned and most respected safety houses in the country.

Their son David describes his father as “a visionary and a builder,” who pursued his philanthropic projects “as vigorously as he did his own business.” Among other interests, David recalls, Marv “was especially enthralled with the predominance of Jewish composers and lyricists throughout the history of modern musical theatre.

In 2003, Marv made a generous gift to CJS as a way of honoring his own father, who was not only in the protective clothing business but was also a struggling song lyricist who loved the arts. In creating the Conney Project, explains David, Marv’s goal was to “look at Judaism in America through contemporary music, Broadway, film, television, dance, literature, and painting — and how each art-form can tell a Jewish story. And  in America, of course, a Jewish story, at its essence, involves the American dream, optimism, opportunity, diversity, tolerance, social responsibility, social justice, resilience, and survival.”

Douglas Rosenberg of the UW Art Department became the founding director of the Conney Project, and in 2005 he designed the first Conney Conference, a biennial gathering for scholars and artists representing a wide range of arts, including music, theater,  film, television, comedy, dance, literature, and painting. Professor Rosenberg warmly remembers Marv and Babe as the couple who made the conference possible. “Together,” he reflects, “they were a force, generous, thoughtful, and full of life.” For Douglas Rosenberg’s remembrance of Marv Conney, please click here.

With a shared love of the arts, the couple became actively involved with the Chazen Museum of Art, the Madison Museum of Contemporary Art, and the Madison Symphony and Opera. They also supported Hillel and Temple Beth El. This dedication to the arts and to Jewish causes continued after they established a second home in Palm Desert, California, where they were among the founders of the Tolerance Education Center.

David Conney recalls that his father was always brainstorming about how to expand the reach of the Conney Project, “how best to fulfill the vision he and Babe had some twenty years ago when they made an initial contribution to the Mosse/Weinstein Center for Jewish Studies to explore building a program that focused on the intersection of Judaism and the arts.”

CJS is deeply grateful to Marv and Babe for their wisdom, imagination, and foresight in creating the only initiative of its kind in the country, and we look forward to expanding its programming in the coming years.  May their memory be a blessing.