When Dina Kraft was growing up in Maryland the UW wasn’t even on her radar. On the advice of a high school friend, Kraft visited Madison one snowy day in February and was captivated by what she calls “the quintessential college experience.” Looking back at that moment now, she describes it with a journalist’s memory for visual detail—the bookstores and coffeehouses on State Street, the cozy atmosphere of Memorial Union. It felt, she says, like home. 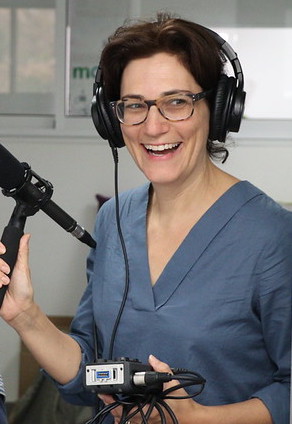 Kraft (BA ’93) knew from the outset that she wanted to study history, but her interest in Jewish studies emerged more gradually. In her freshman year, Edward Said spoke on campus and publicly upbraided her when she questioned him about reported executions of Palestinian informants to Israel. That same year, she started writing for the Badger Herald and covered the heated debate on campus surrounding the First Intifada. It was then, she recalls, when “I first stuck my foot into the morass that was the Israeli-Palestinian conflict.” She decided she had to go to Jerusalem and “figure it out” for herself—not realizing, she says, that decades later she would still be in Israel, full of more questions than answers.

With two semesters of Hebrew under her belt, Kraft spent her junior year in Israel, and while she was there she stumbled upon the topic of her senior thesis. She had long been intrigued by family stories about a great uncle, Ernst Pollak, an early Zionist from Austria who moved to Palestine in 1920, took the name Natan Ikar, and committed suicide at the age of 19. Kraft was able to locate his final resting place in a cemetery by the Sea of Galilee. Wiping decades of debris from the gravestone, she was amazed to uncover an enigmatic engraving that depicted a mosquito stinging the face of demonic-like figure. Ikar had been afflicted with malaria. Returning to Madison the next fall, she described her findings to Professor David Sorkin. He gave her a “massive reading list” to inform her thesis, which received the History Department’s Paul J. Schrag Prize in German Jewish History. Kraft went on to earn a master’s degree at Stanford. In 2012 she was a Nieman Fellow at Harvard and in 2015 an Ochberg Fellow at Columbia.

Today, Kraft is an award-winning journalist based in Tel Aviv whose writings have appeared in the New York Times, the Christian Science Monitor, JTA, and Haaretz, among other publications. In essence, she is still a historian, drawing deeply on the skills she developed as a student. In 2019 she wrote the fascinating backstory of a diary written by Judit Ornstein, a teenaged girl in Nazi-occupied Budapest who was killed in an Allied bombing. When Kraft began researching the topic, it was still a mystery how the diary found its way to an Israeli archive. In hopes that someone in Israel had the answer, Kraft published the piece in Haaretz. Sure enough, a reader reached out and led her to a 91-year-old man who had been Judit’s sweetheart all those years ago. It was he, he explained, who had donated the diary—providing a poignant conclusion to the story.

This past June, Kraft received a B’nai B’rith World Center-Jerusalem Award for Journalism for her writings on topics ranging from antisemitism in the U.S. and Great Britain to healing in the aftermath of the Pittsburgh Tree of Life shooting. You can find her on the Hadassah podcast series she hosts: The Branch, which tells the stories of friendships between everyday Israelis and Palestinians, Jews and Arabs