The American Academy for Jewish Research is pleased to announce the winner of its annual Salo Baron Prize for the best first book in Jewish studies published in 2018. The prize, including a $5,000 award presented at the annual luncheon at the AJS Conference, will honor: 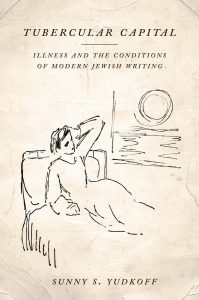 Situated at the intersection of Jewish Studies, Comparative Literature, and the Medical Humanities, Tubercular Capital explores the writing of Hebrew and Yiddish writers for whom the diagnosis of tuberculosis proved an artistic and material spark. It argues that Jewish literature might productively be re-examined through the lens of this disease, which paradoxically hampered and inspired afflicted writers.  Whether they wrote in Eastern Europe, Central Europe, the Middle East, or the American West, Yiddish and Hebrew writers mobilized their diagnoses, translating them into creative writing, monetary gain, and engagement with a long tradition of European, American, and Russian writing about TB.  At times, the results reverberated globally, as in the galvanizing of a trans-hemispheric campaign to help Sholem Aleichem recuperate after his tuberculosis diagnosis in 1908.  Tubercular Capital is a book of great elegance, sophistication, and creativity.  In crossing an unexpected range of texts, geographies, literary traditions, and methodological schools, it contributes to a broad array of fields.  With spell-binding writing and literary élan, Yudkoff puts an unexpected disease at the very center of the modern Jewish and literary worlds, permitting us to see both as never before.

The American Academy for Jewish Research (www.aajr.org) is the oldest professional organization of Judaica scholars in North America.  Its membership represents the most senior figures in the field.

The Baron Prize honors the memory of the distinguished historian Salo W. Baron, a long-time president of the AAJR, who taught at Columbia University for many decades.  It is one of the signal honors that can be bestowed on a young scholar in Jewish Studies and a sign of the excellence, vitality, and creativity of the field.