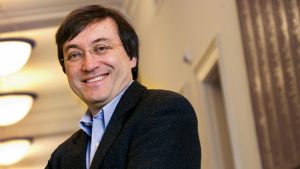 Bio: Moshe Halbertal is the John and Golda Cohen Professor of Jewish Thought and Philosophy at the Hebrew University and the Gruss Professor at NYU Law School, and a member of the Israel’s National Academy for Sciences and the Humanities. Among his books are “Idolatry” (co-authored with Avishai Margalit); “People of the Book: Canon, Meaning and Authority,” both published by Harvard University Press. His books “On Sacrifice,” “Concealment and Revelation,” and “Maimonides: Life and Thought” were published by Princeton University Press. His latest book “The Beginning of Politics: Power in the Biblical book of Samuel” (co-authored with Stephen Holmes) was published by Princeton University Press in 2017.

Both events will be held virtually, over Webex. See links below each lecture description.

“The Biblical Book of Samuel and the Birth of Politics: Two Faces of Political Violence”
Wednesday, Oct 7th (12:00 noon)

The Book of Samuel is universally acknowledged as one of the supreme achievements of biblical literature. Yet the book’s anonymous author was more than an inspired storyteller. The author was also an uncannily astute observer of political life and the moral compromises and contradictions that the struggle for power inevitably entails. This lecture will explore the ways in which the Book of Samuel understands political violence unleashed by the sovereign on his own subjects: as rooted in the paranoia of the isolated ruler and the deniability fostered by hierarchical action through proxies.

This event has passed, so registration has closed.

Israel’s core identity is defined as a Jewish democratic state. Its future and fate will be decided in the way it articulates that identity politically, legally, and culturally. Can there be a nation-state like Israel that is genuinely democratic and liberal, while granting equality to all its citizens and protecting religious pluralism and religious freedom? And what would such a vision look like? This lecture will explore the possibility of such complex self-definition as it relates to the relationship between nationalism, religion, and liberalism.

⇒Click here to register for and attend this event.

The Tobias lectures are co-sponsored by the departments of Political Science, Religious Studies, and the George L. Mosse Program in History at UW-Madison.