VIRTUAL EVENT – Book Talk with Magda Teter on “Blood Libel: On the Trail of an Antisemitic Myth”

Join us for a virtual book talk with Prof. Magda Teter (Fordham University). In conversation with Brandon Bloch (Professor of History, UW-Madison), Prof. Teter will discuss her new book Blood Libel: On the Trail of an Antisemitic Myth, winner of the 2021 American Historical Association George L. Mosse Book Prize

To receive the Zoom link for this webinar, please register in advance by clicking here. 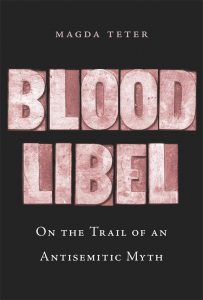 Accusations that Jews ritually killed Christian children emerged in the mid-twelfth century, following the death of twelve-year-old William of Norwich, England, in 1144. Later, continental Europeans added a destructive twist: Jews murdered Christian children to use their blood. While charges that Jews poisoned wells and desecrated the communion host waned over the years, the blood libel survived. The pattern established in early modern Europe still plays out today. In 2014 the Anti-Defamation League appealed to Facebook to take down a page titled “Jewish Ritual Murder.” The following year white supremacists gathered in England to honor Little Hugh of Lincoln as a sacrificial victim of the Jews. Based on sources in eight countries and ten languages, Blood Libel captures the long shadow of a pernicious myth. 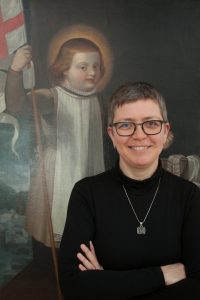 Magda Teter is Professor of History and Shvidler Chair in Judaic Studies at Fordham University. In addition to Blood Libel: On the Trail of an Antisemitic Myth, she is the author of Sinners on Trial: Jews and Sacrilege after the Reformation and Jews and Heretics in Catholic Poland. She served as a consultant for the Polin Museum of Jewish History in Warsaw and for the BBC documentary Unorthodox Vows. In 2012-2016, she served as the co-editor of the AJS Review and in 2015-2017 as the Vice-President for Publications of the Association for Jewish Studies. She is currently a fellow of the American Academy for Jewish Research. Teter has received fellowships from the John Simon Guggenheim and Harry Frank Guggenheim Foundations and was Mellon Foundation Fellow at the Cullman Center for Scholars and Writers at the New York Public Library.

Sponsored by the George L. Mosse Program in History and the Mosse/Weinstein Center for Jewish Studies

Made possible by the Wiseman Fund For a downloadable PDF of this poster, click here