The 2022 Kutler Lectures with Riv-Ellen Prell (University of Minnesota)

The 2022 Kutler Lectures with Riv-Ellen Prell (University of Minnesota) 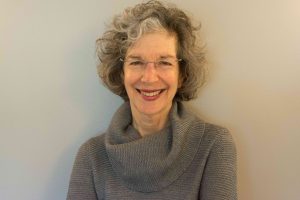 Riv-Ellen Prell is Professor Emerita of American Studies at the University of Minnesota and a long-time faculty member of the Center for Jewish Studies, and Women, Gender, and Sexuality Studies.  Her work is at the intersection of anthropology and history and  she is the author and editor of many books and articles about American Jewish life, specifically about the social, political and cultural dynamics of gender, religious practices, and antisemitism. Her books include Prayer and Community: the Havurah in American Judaism (which was awarded a National Jewish Book Award), and Fighting to Become Americans: Jews, Gender and the Anxiety of Assimilation, as well as a edited volumes including Women Remaking American Judaism. She is the Curator of the 2017 University of Minnesota exhibition, “A Campus Divided: Progressives, Anticommunists, Racism and Antisemitism at the University of Minnesota 1930-1942,” the most attended exhibition in the University’s history, and its website, which has received nearly 40,000 visits. She is the recipient of the Marshal Sklare Memorial Award for distinguished scholarship and service of the Association for the Social Scientific Study of Jewry, and the Max Friedman Award for Outstanding Contribution to American Jewish History of the American Jewish Historical Society.

“University Students in the 1930s: Antisemitism and Racism on Midwestern Campuses”

Uncovering histories of American colleges and universities has become vital to understanding the nation’s structures of power, usually concealed behind an ideology of the virtues of a liberal education. Yet those structures of power shaped campus life in the 1930s, which was then and remains now inseparable from global, national, and local politics. This lecture focuses on racism, antisemitism, and anticommunism at the University of Minnesota and other Midwestern campuses in the 1930s, when public universities excluded Black students from taxpayer-funded housing and limited where Jewish students could live. Right-wing anticommunists on and off campus at both the University of Minnesota and the University of Wisconsin attempted to shape the leadership of the university, and at Minnesota spied on Left-wing students, who were overwhelmingly Jewish, sending information about them to the FBI. Jewish and Black students were excluded from many activities of campus life, and then blamed for their treatment when they protested or demanded change. The lecture will also look at the remarkable successes achieved by Left-wing Jewish students, Black students, and their allies in challenging those in power.

“The Jewish Counterculture of the 1960s and 1970s: A Struggle to Democratize and Transform American Jewish Life”

The American Jewish counterculture of the 1960s and 70s was a loose and diverse network of groups of Baby Boom Jews committed to a broad rejection of American Jewish religious institutions. These groups variously advocated anti-Vietnam War politics, along with new approaches to Jewish prayer, spirituality, study, and community, Left-wing Zionism, and the creation of Jewish feminism and the rights of Gay and Lesbian Jews, among other issues. What historians and other commentators overlook about this era is how these diverse groups came to have a sense of connection to one another, and to a common commitment to democratize Jewish life and challenge the power of the organizations that amassed and distributed Jewish philanthropy. This lecture tells the stories of two unprecedented protests against Jewish Federations in 1969 in Boston and 1970 in New York. These protests created alliances among these different groups and established a sense of a shared purpose. Their demands to transform American Jewish life were grounded not only in the larger Leftist movements of the era, but in deep engagements with the history and memory of Jewish life before WWII, and in a vision for a post-Holocaust culture.