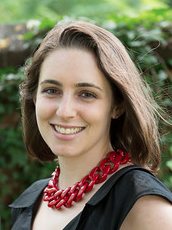 At the beginning of the Spring 2020 semester, Assistant Professor Cara Rock-Singer was teaching a course on Religion, Science, and Medicine when she started seeing reports about an outbreak of a new virus in China. Within weeks, the global reaction to the disease was unfolding in real time and illuminating many of the themes she had built into her course syllabus. As the U.S. and other countries began to announce travel bans, Rock-Singer’s class was discussing ideas about contagion, borders, impurity, and foreignness. While the news media detailed the hazards faced by doctors, nurses, and caregivers, she and her students were talking about the meaning of care and connectiveness.

“I was very primed to be thinking about these things,” says Rock-Singer. As a molecular biology major at Princeton, she had been an “aspiring virologist” with a longstanding interest in the flu. But while she loved biology, she did not relish the prospect of spending all her time in a laboratory. Prompted in part by a course on modern Jewish intellectual history, she began to gravitate toward the humanities. After college she went on to receive a Ph.D. in Religion at Columbia and a postdoctoral fellowship in the Jewish Studies Program and the Department of Science and Technology Studies at Cornell.

Rock-Singer is now an assistant professor in the Religious Studies Program and a faculty affiliate in Jewish Studies, Gender and Women’s Studies, and the Holtz Center for Science and Technology Studies. In her research she draws on her broadly ranging expertise to explore the intersection of religion and science. Using ethnographic and historical methods, Rock-Singer examines the ways in which Jews in the United States invoke religion, science, gender, and sexuality to define and transform Judaism. She is particularly interested in Jews’ creative engagement with the ritual bath (mikveh), which she says some women are now reclaiming as a kind of feminist activism. Rock-Singer also studies how Jews today are combining public health campaigns, biomedical therapies, and Jewish ritual to facilitate healing and to cope with medical issues such as breast cancer and Jewish genetic conditions.

Many of her pre-med students in Religion, Science, and Medicine have remarked on how the course has changed their understanding of their future profession. She found their appreciation of the experience particularly gratifying. “It was incredibly intense,” she recalls, “but it made undeniable the value of the humanities.”